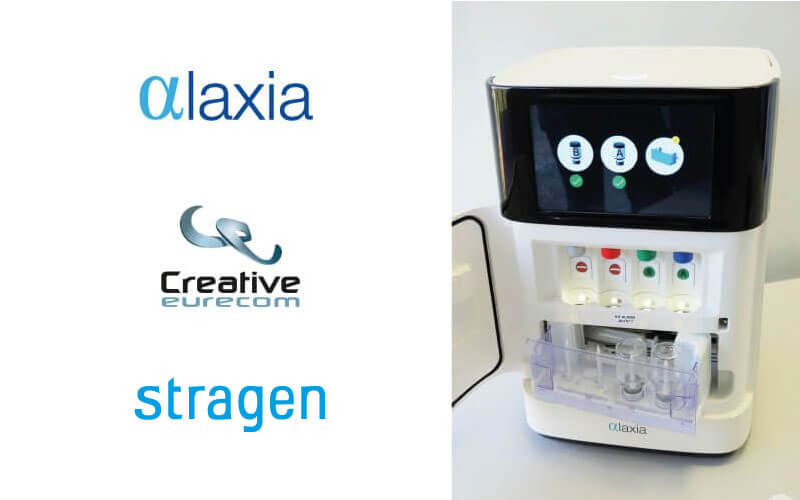 This is a world premiere! A device able to produce at home a drug that has just been honoured with an Award at the GLOBAL INDUSTRIE event, held in Lyon (France) 5th – 8th March 2019. The rewarded is CREATIVE EURECOM, a French industrial research company based in Angers. This innovative device is the result of the strong collaboration between CREATIVE EURECOM and ALAXIA, a French private biotech company based in Lyon.

GLOBAL INDUSTRIE is a major event where the entire industrial ecosystem meet, from start up to major player, including the participation this year of Mr Bruno Le Maire, French Minister of the Economy and Finance. A series of 7 awards honoured the most innovative companies, including the category “REALISATION EXEMPLAIRE” where CREATIVE EURECOM received the Award for realization of an innovative device to produce at home the ALAXIA patented medical device ALX-009. This device allows patients to self-operate the ALX-009 automated production within 15 minutes. The device is composed of two parts, one, a reusable part (=docking station) which pilots the operating steps occurring during ALX-009 production, and a sterile disposable part (=single-use cassette) which embeds a micro-dialysis module. The device works on a closed-circuit air circulating system avoiding the use of any pumps, preservatives or lubricants. It is a major step forward in the development of tailor-made treatment for specific diseases such as lung diseases, or chemotherapy.

ALX-009 is a first-in-class orphan drug candidate developed by ALAXIA, with support of Stragen Pharma Group, to treat multi-drug-resistant bacterial lung infections in cystic fibrosis patients. This promising drug has a 30-minute shelf-life making impossible the industrial production. To overcome this critical constraint, ALAXIA and CREATIVE EURECOM have successfully completed the challenging development of a dedicated device. The device guarantees the production of a safe drug candidate as it includes built-in security functions to ensure an easy, reliable and safe production for administration to patients.